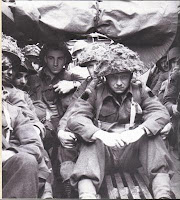 Although Canada was entirely independent of Britain by September 1939, when the Second World War erupted, the Canadian government declared war against Nazi Germany on 10th September nonetheless and the following day issued a similar declaration against Mussolini’s Italy. As was the case elsewhere with many of the western allies, during the inter-war years Canada was thought to have put little investment into its armed forces and in common with its pre-First World War status had a relatively small full-time army of several thousand which was supplemented by a part-time militia, both of which were poorly trained and ill-equipped.

In common with most democratic countries of the time, Canada, along with its former allies, Britain, France, Belgium, Australia, New Zealand, etc. had believed that the losses of the Great War would prevent such an event ever happening again, but as with all of the other allied nations, they were wrong. Fortunately for the allied cause, in common with the United States, Canada was reported to have had the capacity to become one of the world’s greatest industrial producers and like its southern neighbour was able to mobilise these vast manufacturing facilities to produce materials for the war, including ships, aircraft and wheeled vehicles. However, according to some sources, the most important products supplied by Canada during the Second World War were the vast amounts of both aluminium and nickel, both of which were necessary components of the allied war effort. The first military supply convoy reportedly left Canada just days after war had been officially declared and by June 1940, the first Canadian troops were said to have been landed in Europe, in an attempt to reinforce the British and French forces that were being forced back to Dunkirk by the advancing German army. Unfortunately, the Canadian troops were thought to have reached France far too late to prevent the large scale evacuation of the allied expeditionary force and were subsequently forced to withdraw from Europe, back to the isolated British mainland.

Rather frustratingly perhaps, for the Canadian troops, with Britain generally besieged and few foreign theatres in which to operate effectively against Germany and her Axis allies, most of these Canadian forces were thought to have been largely restricted to defending Britain’s mainland from the threat of an impending German invasion, which never actually happened. Thanks largely to a British Air Force which contained numerous Commonwealth pilots from around the world, including many from Canada itself; the German Luftwaffe was prevented from gaining air superiority, which was a prerequisite for the planned military invasion of Britain. With the Battle of Britain won by the RAF and its limited numbers of pilots and planes, Germany subsequently turned its attention to Russia, fatally wounding its own long term military ambitions by fighting on two separate fronts, one to the east and one to the west.


Apart from the ill-fated and largely unsuccessful raid on the French port of Dieppe in August 1942, most Canadian troops had to wait until 1943 before they could become formerly engaged on the European continent, when they were fully employed in both the invasion of Sicily and later the Italian mainland. However, elements of the Canadian army were said to have been involved with one of the conflicts most notable Special Forces units, the Devil’s Brigade, a mixed force made up of both American and Canadian troops. Although they were reportedly tasked for a number of extremely difficult missions, the unit’s first high profile operation was reportedly against Monte La Defensa in Italy, during December 1943, where they were reported to have scaled a seemingly impenetrable cliff face to overcome German positions that were stationed there. Having overcome their initial target, the Brigade were then said to have been used to attack a number of similarly difficult mountain targets, as a result of which some 70% of the unit was thought to have been either killed or wounded.

By January of the following year the Brigade was said to have been reinforced and put back into the frontline at Anzio, where they were first referred to as the “Devils Brigade”, having terrified the life out of the German forces that were opposing them. With the approach of the allied invasion of mainland Europe planned for June 1944, the Canadian forces were said to have allocated their own section of the Normandy coastline, codenamed “Juno” beach, where they suffered heavy casualties as they hurled themselves ashore to begin the long awaited liberation of Europe. Despite incurring heavier losses than any other allied force on the day, with the exception of the American troops on “Omaha” beach, the Canadian troops were reported to have still managed to penetrate deeper into occupied France than any other allied soldiers, save for those paratroopers who had been deliberately dropped inland in order to disable German communication systems, thereby preventing them from reinforcing their coastal defences, which were being attacked and overrun by the allies.

Canadian forces were later instrumental in helping to secure the port of Antwerp, leading a mixed British, Polish Belgian and Dutch force to secure the Scheldt estuary, which was still held by the Germans, thereby preventing the allies from using Antwerp as a supply point for their military operations in Europe. Suffering extremely heavy losses, of which some six thousand were reportedly Canadians, this force was said to have spent several weeks helping to secure the area around Antwerp, before turning their attention to the liberation of the Netherlands. Throughout the entire course of the Second World War, the Canadian people were reported to have contributed hundreds of thousands of their young men and women to the allied cause, who subsequently served in virtually every service, from the Army and Navy, to the Air Force and the auxiliary services, including Nursing and the Merchant Marine. Some one hundred thousand Canadian’s were thought to have been killed or wounded during the conflict, amongst which a significant number of gallantry awards were said to have been earned by Canada’s fighting forces, including several Victoria Crosses, the highest award that could be issued by the British military authorities.

Posted by chesterwriter at 17:11
Email ThisBlogThis!Share to TwitterShare to FacebookShare to Pinterest