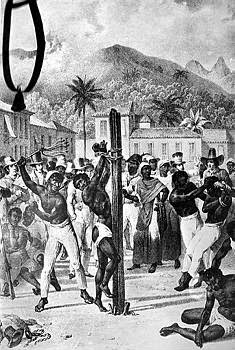 ﻿The British Empire’s active participation in the Transatlantic Slave Trade, which saw millions of Black Africans forcibly transported from their homelands to the Americas, where they were simply sold as chattels, is undoubtedly one of the darkest and least honourable episodes of Britain’s long and generally distinguished history. Commonly used to undermine Britain’s enormous and undoubted contribution towards creating the modern world that we all now inhabit, along with the supposedly wholesale destruction of numerous native societies, the capture, imprisonment, transportation and abuse of millions of Black Africans, remains first and foremost the biggest single charge laid against the founders of Britain’s great Empire. Interestingly however, those who are generally quick to point to Britain’s early and extensive involvement in the Transatlantic Slave Trade, appear to be reluctant to publicise the fact that it was Britain, which ultimately played a leading role in helping to outlaw the generally barbarous trade by the first half of the 19th century.

Read Part Two of Britain & The Transatlantic Slave Trade by clicking HERE:
Posted by chesterwriter at 17:46
Email ThisBlogThis!Share to TwitterShare to FacebookShare to Pinterest